I have a pile of books waiting for reviews.

I contemplated with this current book to not review it.  In all actuality I don’t review all the books I read.  I think some would down right bore you to near death.

You know I would be right.

I see the look on  your faces when I talk Techie and Permaculturey!

Which is why you sighed a little thank you my sweet friend sound of relief!

But this book has me wanting to put it on the shelf and forget about it… and at the same time keeps popping back into my head as… You need to review it!

Amazon has it for a really great price.  And add in the prime shipping it makes it cheaper for me then driving to the book store.

Only because the book store closest to me is over 2 hours away! 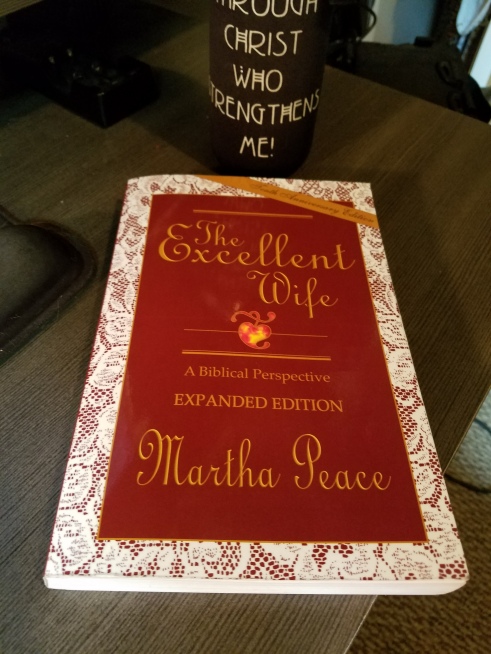 I originally was listening to the book on Hoopla.  An amazing app that my library uses and that has a large array of Christian audio books.  So I started listening to half of the book when my husband was reading his own book “The most Exemplary Husband”.  When I showed him the book I was listening to we compared them and realized they were written to actually be somewhat companions to each other.  So I bought the book in hard cover and off we went into a book club with the love of my life!

I say they are somewhat companions to each other, because while the chapters seem to match for the most part, once you get to chapter 9 they get mixed up a little and take a few side roads.  We always seemed to get back on track however.  And I loved the one on one time with my man… Talking about our marriage and God.

But I started listening to the book because I wanted a better understanding of how I could be the best Godly wife to my husband around.  Every man is different… and needs a different helper.  And every wife is different!  I was off to the comfy couch to delve in to a book that would help me unfold what God says was the Most Excellent Wife!!!!

2.  What I think she missed in this book.

I will point out she wrote the book originally in 1995 and updated it in 2005.  10 years in our ever changing culture it needed the update… Add in 13 more years on to that update… and you have yourself a book that while it still is somewhat accurate today… It’s missing some things.

I actually read the book with 3 lenses on.  1. A wife that loves and adores her husband and wants to make her man’s life easier in every way! 2. The eye’s of a woman that is being abused and well, my old self.  and finally, 3.  A new Christian housewife ready to embark on marriage and life with her man in 2018.

I should stop here and tell you if you haven’t been on my site before that I am an odd woman!  I have been divorced… twice… but only married to 2 different men.  Which means… I married the same man twice.. and divorced him twice.  For very biblical reasons that I won’t get into.

I say that because you need to know I was in a very difficult marriage on and off for 16 years.  I tried!  I prayed! I forgave!  over and over and over…

However, I am the first one that reads a book on this topic and starts the squirming in my seat when they don’t talk about Domestic Violence… and the cycle of violence… properly!

I’ll save the remainder of my comments on this topic for another time.  Trust me.. I will be talking about it!

It felt like she was insinuating through the whole book that ALL women have an issue with authority from there husband’s!  That all women want them dead and dream of them dead…. (Don’t think I am exaggerating… it’s in the book!)  But if you are that type of women, then rest assured she gives you correct ways of changing your thinking!

So here she is, writing a book on marriage and she keeps telling the wife that she has to pray about it and her attitude will change.  Again, she is talking as if we all think this way!

I don’t!!!!  Literally!!!  I just want to be the best wife for my man and looking for ways for God to show me where I should change!!!

She goes on to say, if your husband doesn’t fix something on the house and their house becomes run down then that is a reflection on him if they live in a slum.

Stop the presses right now…. If the largest investment of our lifetime is falling down and my man doesn’t fix it… then I better get my butt on YouTube and teach myself how to fix the home that God and my man have worked hard for!  It is the least I can do for my hard working man!!!!!  I am not helpless… I am HIS HELPER!!!!  And if I can help him save money.. and learn something in the process… then Good for us.. we work as a team!!!!

My husband is the leader… I am his helper!!!!

(This is why I didn’t want to do a review… I was heard many times yelling at the book.)

I also found, as my husband did in his book, that they were using scripture and attempting to bend it to fit what they were trying to say.  I understood what they were saying… But checking biblical commentaries and other versions … It just didn’t fit fully.

She used the NASB bible version and while I do use that one, it’s not my go to, amazing easy reading version.    It’s not even in the top 5.

I know, you think I am being overly critical.

I will add that even my husband told me specifically NOT to follow some of the books entire chapters.  (threw my hands around his neck and kissed him dearly!!!!) And there was a point in time where we were both feeling negative moments in our relationship over how the books where telling us…. For mine… Women just need to follow and be quiet.. and his… it’s always the women’s fault.

I am only kidding a fraction!

I liked the chapter on sex.  Because we don’t take this chapter serious enough and we don’t teach our girls about what it really means to be a Godly wife in the sex category.

There…. I found a positive!

I didn’t like the fact she said a woman should not work outside of the home.  I found that to be rather interesting… She went on to say that it was the man’s job and the man should make it so the women should not work.  I don’t fully disagree with that… but what if a woman has a special calling.. like to be a nurse.. or amazing attorney?  Because she marries a man she loses the ability to practice the gift God gave her?

I am still thinking about that one…. I am also still working on that.. even Proverbs 31 talks about how she bought a field with her earnings….

The last thing I want to comment on.. She specifically was talking about how women should do what there husbands say… unless they go against God.  She used the example of if a wife doesn’t drink… she should still go to the bar with her unchristian husband but just not drink.  I have a problem with this…. Because, going to a bar and not drinking…. while totally possible… I know… is actually asking for trouble.

I would rather her tell the wife to decline the invitation to go to the bar but suggest a nice restaurant instead?  But that’s just me.

I don’t flick my finger on satan’s nose… I stay as far away from him as possible.

3. Who I would and wouldn’t recommend buying this book.

I would say no one.. but I met a women that had read the book and got a lot out of it.  She commented on how she was that women that always tried to control and think bad about her husband.  She went on to say the book really helped her focus on ‘rightful thoughts’ instead of sinful ones.

So if you fit in the above description…. I totally recommend this.

If you are in an abusive relationship or have been in prior relationships I would suggest  you steer clear of this book.  It’s missing sections that adequately advise you of what biblically to do in these area’s.

By now you might think I am a horrible person.  Out of touch with Christian living and off my rocker.  You might be right.  But having been a women that sought Godly counsel and lots of it and followed the scripture and advice I was giving.. and then as a dispatcher, having touched and helped many women in their marriages, during the worst moments of their marriage, this book was just missing the point.  I am not a hardened wife that wants my way.  I am a wife that wants to serve her man and love on him.

With that all said… I would most likely recommend it to someone that needed a ‘rightful thinking’ book.

*Some links are affiliate links

One thought on “Book Review: The Most Excellent Wife… 3 things you should know.”