I hate the snow….

I love the snow… I love the beauty and the cleanness of it.  I love how quiet it is… How the world seems to stop and take notice and then it happens….

The world crashed to a sudden halt… Flights are cancelled and roads are closed… cars are skidding across freeways and sliding off roadways and power is lost and people are cold….

Here’s a visual or you….

I should mention I am from California and specifically from the bay area… where it snowed once in my history… and that is putting it loosely… and then lived most of my adult life in the central valley…where again.. it snowed once while I was there….

I have photos to prove both of those momentous occasions.

I like predictability.  I like knowing that if I make an appointment for that Friday that I will be able to keep said appointment.  So basically, what I am saying… is I like to be in control.

Yet, God moved me to an area that sees snow ‘every 7-10 years’ (really it’s every year to year and a half… the locals lie!).  I also am not even mentioning the roads that turn to ice rinks the rest of the winter, and for the last 9 years I have literally felt TRAPPED in my home when a flake falls from the sky.  (Reference video above.)

I mean we do have a road up to our residence that is about an 18% grade!  We do live on the coast of Oregon where the margin for error is less then the length of a dollar bill in most part of the Highway!!!!  Your choice?  Slide into the rock mountain… or down the cliff into the cold swift river.

Seriously.  Those are the choices.

A few months ago I was talking to a woman from Wisconsin.  She was mentioning how she grew up in the snow.. and always laughed about us Oregonians when she saw we shut down over a few inches of snow….  “You all are crazy for even going out on the roadways… at least where I came from the roads were wide and the worst that ever happened was me sliding into a ditch.  Here?  You go into the river!!!!!”

I just reminded her, she chose to live here!  (and smiled!).  I’m going to bet she made that decision during the summer.  We have awesome summers!

My husband on the other hand is amazing with the snow.  It doesn’t stop him one bit.  But he grew up in the snow.  He grew up in snow country in Northern California and learned to drive in it as a kid… skidding his cars and racing his friends and doing all the odd stuff boys do when they are young and fearless…..

He learned what not to do at a very young age… when he was fearless and frankly, could recover and bounce back easier.  Cars were also much cheaper back then!  Roads were less curvy and hilly where he lived also.   Do you see where I am going here?

Last Sunday, coming home from church I realized… I need to stop this silliness of being scared of the snow.  God didn’t put me on this earth to be scared… He made me in His image… and He controls the weather!  How many times in the bible does it literally say…. For us not to fear?

Ya, I googled it really quick… From what I quickly saw… anywhere from 65 to 103 to 365 times… depending on who you read, which versions you read and so on.

So obviously I need to do my homework on what God says on not fearing….

I also need to work on my trust level with God being in control…. During snow events.

Because God knows I am fearful of driving in the snow.  He controls the weather.  He can make it not snow on the days I have to go somewhere or help someone.  So, reasoning would stand that when it snows, I need to embrace the beauty and knowledge that God was in total control…. Evaluate if I should cancel the plans I have, or if God was literally causing the snow to fall so, I would simply get a driving lesson in snow!

Either way, a slight detour in the snow shouldn’t cause my world to fall apart!  While I run around the house chanting….. “We’re All Going to DIE!!!!!” (again… video reference above!)

I need to rest in the knowledge that the Lord is good.  He is a present help in times of trouble. He hasn’t forgotten me.  He is with me!  And this detour/disruption… is planned by Him for a specific reason.

Today I am choosing to believe the reason is to sit and enjoy the beauty.   Something I usually don’t do… I usually…. well, you saw the video above.

I know, slightly chicken of me, I agree!

But it’s the first time I actually went outside to take photos of the snow…. And while it was cold…. I softened my heart enough to see past the death of the cold white stuff… and saw the beauty as it landed on the ferns and agapanthus.  Most likely killing the Aggies… but…..

I would also like to point out that the chicken’s door has been open for 2 hours and they are still huddled inside the living room scared to step in the snow…. Or at least that is how I choose to look at it. 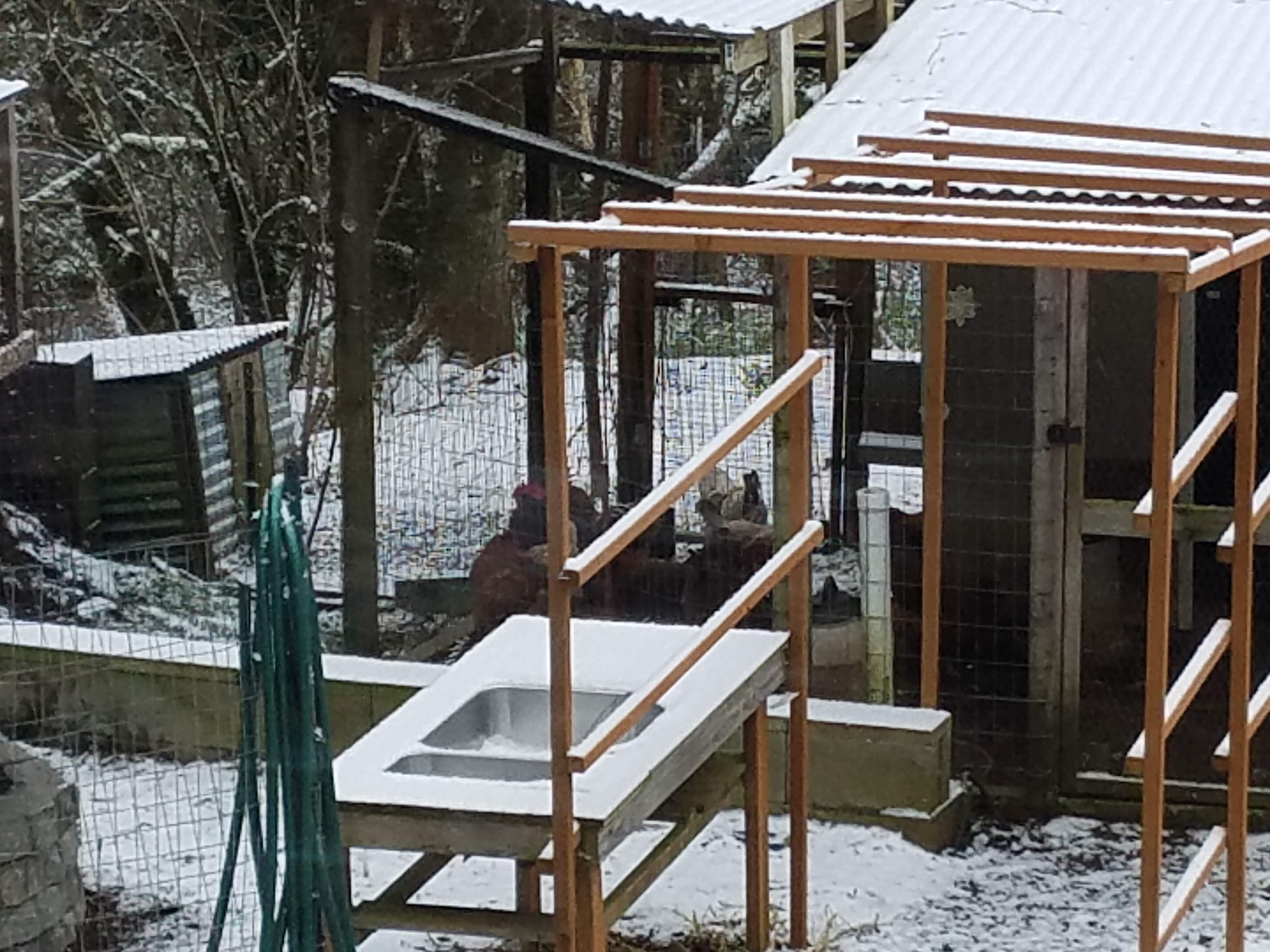 The bottom line for me:  I can’t allow the weather to isolate me inside my home in fear.  That simply isn’t how I was created.  Trusting in the one that allowed it to fall…. That is the key.  Taking baby steps to venture out… take photos and drive our long driveway to see what the car can and can’t do.. that is a good idea… Changing my mindset from a paralyzing ‘I can’t’ to ‘I can do all things through Christ’ and finding someone to teach me the basic’s… is a better path.

I’ll be honest, I think we all can live with a bit of anxiety.. and I often wonder if us giving in to the periods of anxiety are us giving in to what God is calling us to do?  Anxiety paralyzes and isolates and imprisons ones self.  God never meant for us to be in bondage.  So when I look at anxiety I get the feeling that I am looking at a form of an attack from satan.  This way of looking at it has always gotten me to work on what I was facing in fear.  It’s what makes me work on being fearless and sticking close to God.

Webster dictionary describes it like this…. (The 1828 version of the dictionary, his first one… is what I use. )

But because I am interested in how our society has changed the meaning of words.. lets look at the way they describe it today…. 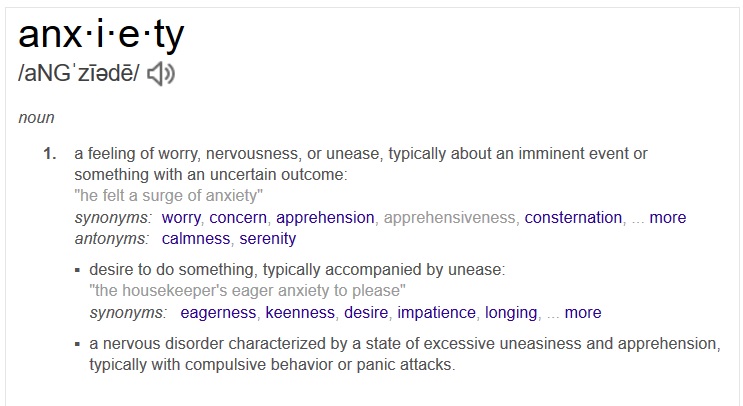 I find it interesting that they took out the reference to the feeling of evil.  and also made it a disorder.  Considering that anxiety, isolates… and isolation is what satan does best.  and that is when we are most vulnerable to being influenced by satan.

Let’s be honest here.  The farther we slip from God, and His word the more anxious about things we become.  The more we feel defeated in simply trying and just give up.  But the more we fight the feelings of worrying, concern and uncertainty the more we find ourselves living out God’s word… Fighting the enemy with truth that we are to be courageous and not fear and to cast our cares upon the Lord….

God didn’t create me to live in fear of the next snow storm.

And honestly, he didn’t create you to live in fear of what you are afraid of either.  We are to stand firm in His word… and hand our worries over to Him and venture forward into the life He has created for us….

To help you get out the door….here are some verses for you.. on fear and anxiety… I came across while I was surfing the web today, from the inside of my kitchen.. looking out the window… at the cold scary… I mean beautiful snow…

One Well Mamma… Thank you for this post!  https://wellnesselevation.com/2018/01/24/32-bibles-verses-for-fear-and-anxiety/